The Bondage of Love

I’ve wanted to read the Story of O for years. I remember, as a child, adults referring to it with raised eyebrows, hinting at their own sexual liberation and kinky interests. Its reputation as a work of “pornography sublimed to the purest art” hasn’t waned since its publication in 1954. It was written by a woman who kept her identity a secret for years; it was burnt by feminists in the 1970s; and it was made into a film which was refused distribution in Britain for 25 years. This was a book that would change my erotic life forever. And yet, having just finished it, I cannot think of a more shocking or a less arousing book. It’s fascinating in its depiction of the complete submission of the self to the point of annihilation but not as a handbook for desire. It’s a book about willing enslavement; O eventually gives up every last part of herself – mentally, emotionally and physically – for the pleasure and control of a man that she didn’t choose. It has affected me, but not in the ways that I expected.

The Story of O is beautifully written; it’s a work of literature rather than an arousing means to an end. It has a dreamlike quality, an element of uncertainty that’s common amongst modernist writers, yet it’s firmly grounded in Paris. It starts with O and her lover, René, taking a stroll through a park that they’ve never visited before. They get into a taxi with no meter and, without her lover telling the driver where to go, the car starts to move. She wears what she always wears, “high heels, a pleated skirt, a silk blouse, no hat.” (p9) He tells her to unhitch her stockings and to fasten them above the knees with elastic he brings out of his pocket. He then tells her to take off her pants and he takes her clothing and bag and puts them out of her reach. He then tells her to pull up her slip and her skirt so she is sitting with her skin directly on the seat. As they arrive at a small mansion in Roissy, he undoes her shirt and cuts off her bra with a small pen knife and removes it. He then says: “Here’s where I leave you. You’re going to get out and go to the door and ring the bell. Someone will open the door, whoever it is you’ll do as he says. You’ll do it right away and willingly of your own accord, else they’ll make you, if you don’t obey at once, they’ll make you obey.” (p12) Or there is another version where O is driven to the same mansion with René and his friend explains that she’s been prepared all this time and now her hands will be tied behind her back, her clothing removed and she will be blindfolded. 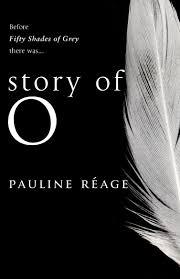 However René takes her there, O arrives at the mansion and is washed by two young women dressed as 18th century chamber maids. On her first night, she is led naked, draped in a red cloak and blindfolded, into a room where four men are taking coffee. They discuss when to restrain her. Then each one fucks her, vaginally, anally and in her mouth, before they explain to her that at night, all the men will wear masks so she doesn’t know who “is responsible for the worst of her sufferings” (p19). They then attach her to a chain hanging from the ceiling and whip her with a crop between her waist and her knees and judge the results, “not by her screams and tears but by the more or less vivid and durable marks traced on her flesh by the whips.” (p21) For the following weeks she sees René only sporadically and she is dressed either in a collar and bracelets or as a chamber maid with her breasts exposed above a corset. She sleeps in a cell, chained to a bed, looked after by a valet who washes her, punishes her and can fuck her whenever he wants. She is there to serve her masters, she cannot look at the men in the eye without being punished, she must be willing to have them use her in any and every way they want. She wears anal plugs of increasing size over two weeks to enlarge her for intercourse. She is dressed as a maid in the day, expected to do daily chores, and naked at night when she will be whipped. Her time in Roissy culminates in a vault where she is held for an unknown period of time, naked, blindfolded and chained. She loses track of the visitors, sometimes they come in groups or singly, “she also lost track of the whippings and her screams”. (p70)

The following three parts of the book are about O’s life back in Paris. One of the fascinating aspects of O’s character for me is that she would have been an unusually independent young woman for the early 1950s. She is a successful fashion photographer, she lives with her lover and, previous to meeting and falling in love with René, took both men and women to bed. She’s not an obvious candidate for enslavement. Yet, with each page, she dissolves her self further into submission. In the second part, she gets rid of all the clothes that don’t comply with the rules of the secret society and wears an iron ring around her finger. René gives O to his half brother, the Englishman, Sir Stephen, who can use her as he wishes – and anal sex is his preference. She is owned by them both, but slowly René disappears. In the third part, O agrees to go to stay outside Paris with Anne-Marie, who brands her with Sir Stephen’s initials and pierces her labia, attaching a heavy chain to it so she can be led around by the vagina. It bangs against the bath when she stands to get out. The book ends with a dinner party in the south of France at the house of the secret society’s commandant, where O is led naked by the chain, an owl mask on her head, to sit in the corner, used by anyone there. When the guests leave, Sir Stephen and the commandant lay her down on a table and possess her, “now the one, now the other.” (p262)

In 1994, the identity of the author was finally revealed to be the well-respected intellectual writer and publisher, Dominique Aury. She’d written it to tempt back her lover, the publisher, Jean Paulhan, who’d taken another woman and stated that women couldn’t write erotica like the Marquis de Sade. She described writing the first part at night in bed on exercise books, her knees drawn up. It hadn’t been meant for public consumption but Paulhan thought it was exceptional and encouraged her to write more, which she did but admitted that the latter parts of the book were more of a struggle. For her, the Story of O, was a love letter. The entire reason O consented to prostituting herself, to be “ritualistically soiled by saliva and sperm”, was out of love. And by doing so she found that “those parts of her body which were the most continually offended, having become more sensitive, seemed to her to have become, at the same time, more lovely, and as though ennobled: her mouth clamped upon anonymous members, the points of her breasts hands forever were fondling, and between her wide flung thighs, the twin ways leading into her belly, avenues trod by a whole wide world to pleasure.” (p64) O felt her dignity increase.

When I asked my mother if she’d actually read the Story of O, she said that they’d sold it in the alternative bookshop she’d worked in in the 1960s but she’d only flicked through parts of it. And I suspect that fewer people have read the book than refer to it. Although the Story of O wasn’t the ultimate book of erotic literature for me, I’ve not stopped thinking about it since I finished it. It’s a brave book even if I winced as I read it. It’s opened my mind to an extreme form of submission and the death of the self. And, ultimately, it is a book written about enslavement through love.