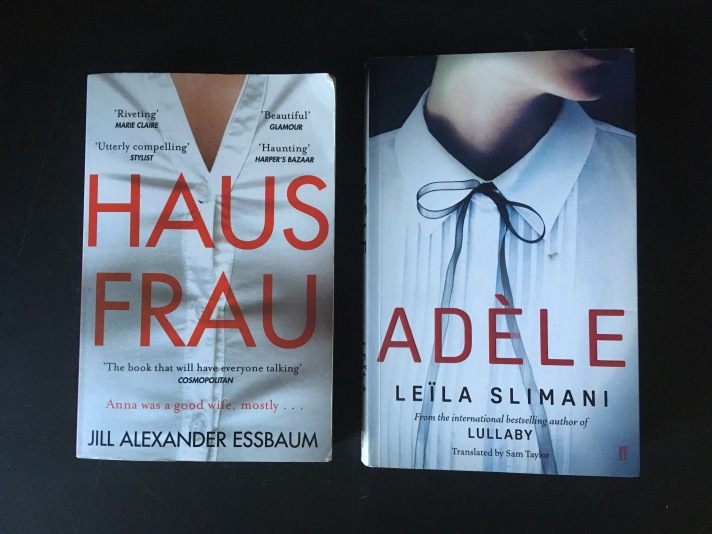 Hausfrau and Adele are both debuts written by women, recently published in the UK and both deal with the gnarly subject of a mother seeking sexual adventure outside a stable, middle class marriage. They explore what a woman loses of herself in the role of mother. How is the sexual self kept alive with the mundane chores of a housewife and the predictability of a husband? How is a woman’s sense of her own attraction and beauty bound up in being desired? How far will she go to escape the constrictions of bourgeois life and feel “her sensations return”?

Leila Slimani’s first novel, Adele, was published in France in 2014. It was translated by Sam Taylor for Faber this year after the international success of her second book, Lullaby. The protagonist is a beautiful, mixed race journalist who lives in Paris with her upper-class, doctor husband, Richard. They have a young son, Lucien, whom she loves but finds “a burden, a constraint that she struggles to get used to.” She battles with an emptiness that can’t be filled by the “comfortable retreat” of marriage. She is a sex addict, which in itself is unusual for a female character, the only other example I can think of off hand is Charlotte Gainsbourg in Lars von Trier’s Nymph()maniac. She is not fully engaged in her marriage and the endless conquests are incidental, “He might do”. The men she fucks often seem to disgust her, it’s the high of desire she wants, a physical annihilation that she’s craving. She tries to stop, but then, “she feels beautiful and she hates the idea that her beauty will be wasted, that her good mood will be for nothing.” It’s a compulsion that knows no bounds: she seduces her boss, her best friend’s lover, her husband’s colleague. “She didn’t want men she would have to approach. It wasn’t for the flesh she yearned, but for the situation. Being taken. Observing the look on a man when he came. Filling herself up. Tasting another’s saliva. Miming epileptic orgasms, lascivious pleasure, animal satisfaction. Watching a man leave, traces of blood and semen under her fingernails.” (p119)

Hausfrau was written by the American poet, Jill Alexander Essbaum, and it’s an extremely well constructed book. The story is about Anna, an American living in a small town outside Geneva, Dietlikon, with her Swiss husband, Bruno, and their three children. She’s remains an outsider, even after eight years: unable to drive, speak the language fluently and act independently. She relies upon her mother-in-law to help with the running of the home and childcare. She keeps herself separate and, like Adele, she’s not really engaged in the bourgeouis life she is living on the surface. “Anna rarely felt at ease within her skin. I am tight-faced and thirty-seven years, Anna thought. I am the sum of all my twitches.” (p7) The novel is punctuated by conversations she has with her psychotherapist, Doktor Messerli, who tells her with impatience: “‘A modern woman needn’t live a life so circumscribed. A modern woman needn’t be so unhappy.’” (p37) Anna starts having an affair with a Scot, Archie, whom she meets while attending a German for Advanced Beginners course in Geneva. It’s not her first. “Anna loved and didn’t love sex. Anna needed and didn’t need it. Her relationship with sex was a convoluted partnership that rose from both her passivity and an unassailable desire to be distracted. And wanted.” (p45) Her life drifts along in its marriage to a man she cannot imagine living without but from whom she feels alienated. She sneaks off to have sex with her lover and then adds another one, Karl, thinking: “Where are my sons? It’s raining and I’m in the woods. It’s Daniela’s birthday and I am letting this man fuck me.” (p109)

Adele and Hausfrau start with similar sentences: “Anna was a good wife, mostly” and “Adele has been good. She has held out for a week now.” Both women are trying hard to be paragons of motherhood, of nurturing and engagement. A role that is supposed to fill a woman to the brim. It’s far more shocking to read about a mother leading several sexual lives at once, than a father. Yet, both protagonists are outsiders to their own lives, their own homes and, to an extent, their own children. As Dr Messerli states: “A lonely woman is a bored woman. Bored women act on impulse.” Both women define themselves by being desired by other men. Anna satisfies the yearning with romantic fantasy and sex; Adele with copious random fucking. Both women’s lives begin to disintegrate as their search for pleasure takes over their lives and the risks become more extreme. When her husband is in hospital after an accident, Adele hires two rent boys and buys five grams of cocaine. After a couple of hours of sex, “she told him: ‘It’s not enough.’ She wanted to feel it. She thought she could take it. Five times, maybe ten, he lifted up his leg and his sharp, bony knee smashed into her vulva.” (p114) Although Adele’s behaviour is more extreme, both women are ultimately caught by their husbands and their lives unravel into varied oblivion. Tragic annihilation. Both novels mirror, in different ways, the two most famous adulteresses in literature: Anna Karenina and Madam Bovary. By following the needs of the flesh, they lose everything.

Adele and Hausfrau are well-written and important novels in the de-mystification of female infidelity in marriage, the power of desire and the constraints of being a mother and wife. Both books are explicit in their depictions of sex. The worlds these women inhabit are liberal, educated and contemporary, yet both stories resonate with 19th century tragedy. It’s as though we still believe that a mother who puts her sexual self before her family deserves, at some level, to be pilloried and sacrificed. It’s a warning. Adele and Anna are quite damaged people: do they still deserve to suffer such a sacrifice for their behaviour?