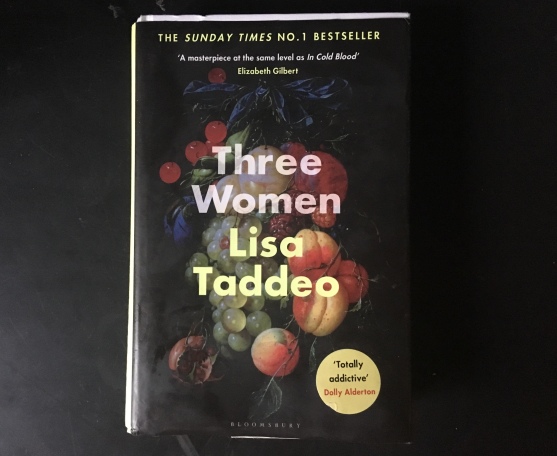 When I first picked up Lisa Taddeo’s Three Women, I was wary of the breathless praise that accompanied it: “groundbreaking”, “once-in-a-generation” and Elizabeth Gilbert’s statement on the front cover that it was “a masterpiece at the same level as In Cold Blood”. Yet, despite my best efforts to prove them wrong, I can’t help but agree. It’s an astonishing book, beautifully written. I finished it ten days ago and I can’t stop thinking about it. It opened up the subject of female yearning in all its “beauty and violence” in a way that I’ve never read before.

Lisa Taddeo spent eight years immersing herself in the lives of three different women of differing ages, backgrounds and geographical areas across America. She started researching both sexes, drawn initially to the stories of men. “I think that the desire is so strong in the instant that everything else – family, home, career – melts down into a little liquid cooler and thinner than seman. Into nothing.” (p4) But she ended up focusing instead on three women – Sloane, Lina and Maggie – who were brave enough not to hide any part of themselves. Who bared themselves in their entirety, without the mask of society’s expectations, who came to represent for her what longing looked like. “The stories wherein desire was something that could not be controlled, when the object of desire dictated the narrative, that was where I found the most magnificence, the most pain. It resembled pedalling a bicycle backward, the agony and futility and, finally, the entry into another world all together.” (p5)

Sloane is a high achieving restauranteur, in her early forties, who lives on Rhode Island. For many years, she’s been successfully married and in business to her chef husband, Richard. They have two daughters. Sometimes, at the request of her husband, they have sex with other men and women that he chooses. Sometimes, if he’s not present, she describes it to him afterwards. She understands how the dynamic works. “Your husband must concentrate on you. Yes, something is happening for him, but that is a physical sensation and he needs to feel it, experience it, enjoy it, but in his brain he must be concentrating on where you are.” (p49) Sloane has always been an object of desire, she’s “beautiful, well-bred, thin.” (p37) She’s relaxed with their unconventional version of intimacy, “sexuality without boundaries.” But she is also aware that people in their small, seasonal town gossip about her, but she is protected by her success and her class. They crossed a line that can never be uncrossed “but when she is with her husband, it is just the two of them – even when it’s not.” (p302)

Lina is a housewife in Indiana. She also has two children, a house and all the appropriate trimmings. Yet her husband, Ed, doesn’t kiss her, doesn’t take her face in his hands and press his mouth to hers. Their marriage is without the affection and warmth that she craves. She becomes depressed and her body is racked with fibromyalgia that she takes strong painkillers for. She embarks on an affair with a married man called Aidan whom she dated at school and reconnected with on Facebook. She knows that he doesn’t care for her, she has to chase him and tempt him back each time. She is unfailingly open to him. Yet, she’s elated and transcendent by their affair; by the way he kisses her, holds her and fucks her; by the way they physically connect. It’s what she most wants. “The way he French-kisses me, she will tell the discussion group later, it’s like he’s inside my body and flipping a big ole switch and I just turn on, all of me lights up. She will shudder, recalling the weight of his firm tongue.” (p96) Even the family chaos of her separation from her husband is nulled by her brief moments of respite with Aidan.

Maggie is the only one who’s name isn’t changed to hide her identity, because her story was already in the North Dakota press. She’d been in court, attempting to prosecute her high school English Literature teacher, Mr Knodel, for taking advantage of her when she was a minor; and lost. He was married with three children, an upstanding member of the community, he’d won Teacher of the Year in their state. She was just a bright girl from the wrong side of the tracks, struggling with alcoholic parents and waitressing at Buffalo Wild Wings for money. She’d left University and was struggling with prescription drugs. During the court case, she was mauled by the press and by other women for being a whore and fat cunt. Lisa Taddeo tells her story and it’s a story of young love and obsession. It poses the question of “when and why and by whom women’s stories are believed – and when and why and whom they are not.” (p5) Maggie didn’t feel that she was abused. In many ways the love affair with her teacher was the high point of her early years, something she still dwelt upon, even sitting opposite him in court. “Of course, you also want him to want you still, to lament what he lost. You want him to sit at the dinner table later, meditating on the smiling bone of your hip.” (p11) She just couldn’t bear to be dropped as though it had never happened.

A good friend of mine who read Three Women commented that she couldn’t connect to Lina, Sloane and Maggie because their lives were too varied and extreme. I didn’t feel like that at all. These women’s lives bear very little similarities to each other or to my own life, they are not representative of my sex, but they exposed a kernel of truth. “So many of the fears about desire seem to be things we should have overcome years ago. We can say we want to fuck indiscriminately, but we cannot exactly say that we expect to be happy.” (p300) It made me realise how unusual it is to read such honest and real accounts of female desire and I can only hope that it will be part of a movement that emboldens more women to confide their own stories about their bodies and their longings in this post #MeToo world.

One thought on “What Women Want”