The Cabinet of Lost Minerals

In 1810, Sir Charles Greville’s substantial collection of minerals were bought by the British Museum for a small fortune – £13,727. Along with the cabinets that housed them. It was known to be one of the finest collections in existence and he’d assiduously acquired it over the last 35 years of his life; an abundance of “Earths, Stones, Crystals, Fossils and Minerals.”

Yesterday, I met Robin Hansen, Curator, Minerals and Gemstones, at the Natural History Museum to see what could be found, if anything, from Greville’s original collection. I arrived an hour before the Museum opened so we might search undisturbed. There is something so quiet and majestic about the Museum without the usual crowds of excitable school children and eager tourists; your feet echo along the cavernous spaces as gargoyles crawl down the pillars. It’s thrilling to walk through the secret back doors and corridors where only curators have keys, past ceiling-high, grey cabinets of filed dinosaur bones and teeth and to climb up spiral stairs into a vault built close to the 19th century moulded ceiling. Each hidden object is a clue to another existence. The Natural History Museum only has the space to exhibit a fraction of its 8 million specimens. The Mineralogy Department alone has over 180,000 specimens in it’s collection, of which only 12,500 can be displayed at any one time in the Gallery and around 2,500 in the Earth’s Treasury area.

I was incredibly lucky to have found Robin, who couldn’t have been more friendly and knowledgable. The task of trying to unpick the sketchy catalogues from that era and to find minerals that might well have changed name over time was well beyond me. Greville bought the first, and largest, section of his collection in 1773 from Baron Ignaz von Born, a Bohemian aristocratic collector, who worked in the mining department of the government in Prague. He’d used a Swedish system of categorisation developed by Gonstedt earlier in the 18th century. There were 17 species of mineral recorded in his initial collection. Some of which were drawn for posterity by James Sowerby. Today, there are around 5,300 species of mineral, with an additional 30 to 50 being added every year. The first time that the curators at the British Museum began coherently to record their stock was in 1837, and fifty years later the process was still going. I was shown the original ledgers, seams of stone from around the world, painstakingly defined and handwritten in a neat hand in blue ink.

The Natural History Museum was moved to its current site, the glorious, striped, purpose-built space on Exhibition Road, in 1881. The Mineral Gallery hasn’t changed since they first moved in, nearly 150 years ago. It’s tucked away in a corner on the first floor; a spacious, high-ceilinged gallery filled with light and table-like cabinets displaying an array of specimens from around Britain and the rest of the world. Pillars run down the centre of the room and carved, evolving creatures crawl up them. Robin had kindly cross-referenced the few minerals that were almost certainly from Greville’s collection and then led me from cabinet to cabinet, drawer to drawer, with speed. Carefully picking up Greville’s specimens and turning them gently in her hands. They had names that meant very little to me but sounded solidly scientific: from Copper to Aragonite to Columbite to Fluorite. 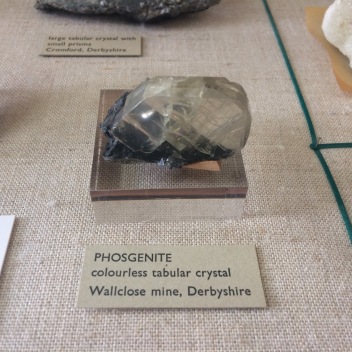 Sir Charles Greville had an impressive Rubellite, the size of a baby’s head, with narrow prisms of rock in parallel, the colour of ageing blond hair. It had been given to Major Symes by the King of Ava – now in Burma – in 1795. There was a chip of amber in a Limonite of deep brown colour. We noticed a system of three symbols that were carefully stuck to the underside, which very well might have been Greville’s personal categorisations because we found it on his other minerals. There was a Phosgenite from the Wallclose mine in Derbyshire – dark grey crystal going to cloudy clear. We found two Copper specimens from Hungary that had almost definitely been his. One is iridescent with purple and green glitter and scattered with a dull rust colour. There was a large Hematite from Platten in Bohemia in a dusty dark pink, which looked like it could be crumbled into a fine dust. And a beautiful, pale green topaz, the size of a papaya, that came from Siberia. I never expected that so much could be uncovered 200 years later; carefully wrapped and sitting, waiting for me, in their boxes.

The guard strolled over from his chair by the door, formal in a dark uniform and peaked hat. “They’ll be coming,” he said, and walked back to his place. It was 10am. And then, I heard them. A great crashing wave of sound, of hubbub and chat and the screech of school children as they reeled and scattered through the many-levelled Museum; pouring in beneath the huge, hanging skeleton of a whale. I’ve never heard anything like it.

Robin carefully put the Aragonite back and we disappeared through a hidden door in the vault. As though we’d never been there.

One thought on “The Cabinet of Lost Minerals”