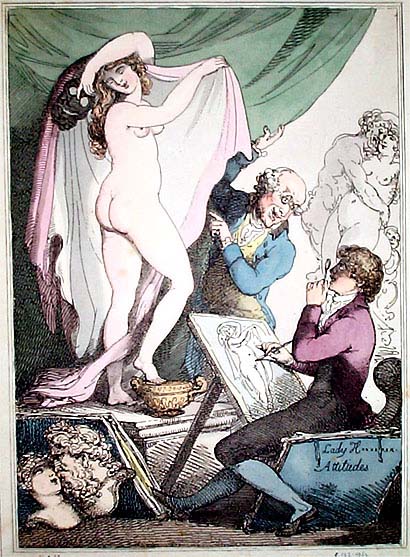 We live in an abundantly voyeuristic period. We’ve expanded the action from the strip clubs and peep shows of the 20th century into our own homes and given them every twist imaginable – some of them incredibly dark and misogynistic. The internet allows us to view anything that turns us on, anywhere in the world, at any time. We can gaze through our screens like peeping toms and even direct an overly made up woman in a room in another country to act out a personal fantasy. Everything is possible for the voyeur online.

One thing that’s fascinated me while researching my novel is how prevalent voyeurism was in the 18th century as well, although without the advantage of technology. The practice of gaining sexual pleasure from watching others when they are naked or engaged in sexual activity [OED] is not modern. Perhaps it’s human instinct. The woman upon whom my historical novel is based started her career as Amy Lyon, a posture girl at the Drury Lane Tavern in 1779. A naked teenager, squatting over a line of mirrors on the bar while the men leant into the candle-lit reflective pools, three-cornered hats tucked under elbows and hot breath misting the glass. A few years later she was called Emma Hart and she posed for the artist George Romney in his painting room on Cavendish Square. As she transformed into a goddess, she was surrounded by a hungry audience of wealthy and cultured men. She seduced them all with her white flesh, red mouth, transparent toga and a visible breast. It wasn’t only her, audiences were common when artist’s painted beautiful women in various guises. It was a century of spectacle, after all, where the high class brothels vied for more erotic displays of female flesh and put on productions like Charlotte Hayes’s The Venus of Tahiti.

The prolific artist Thomas Rowlandson (1756 – 1827) is known primarily for his humourous caricatures and social commentary. He was one a group of British artists at the time who used the relative freedom of the press to send anyone and everyone up; poking fun at the political and social foibles of the age. No one was safe from Rowlandson’s humourous eye; royals, politicians, entertainers and people of fashion were all brought down to earth and shown to be ridiculously human. He chronicled the London he was born into and lived in with great detail and affection; the theatres, the race course, the gambling tables, the coffee shops, the artistic establishments, the romantic trysts and sexual liaisons. He brings the late 18th century alive. And, while researching for my book, I stumbled upon a fair amount of Rowlandson’s more erotic, even pornographic cartoons. I’m not sure if they were for private use or not. 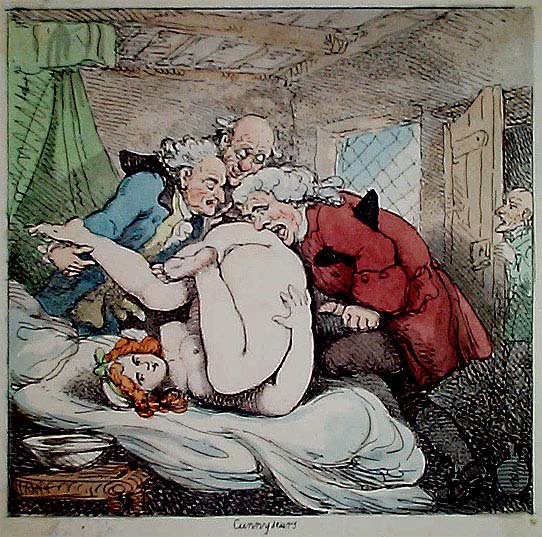 Rowlandson painted a surprising amount of women exposing themselves, lifting their skirts or spreading their legs, for men to watch them; their mouths hanging open. Like the one of Lady Emma Hamilton – we now come to my heroine’s final name – being painted by a young artist. He studies her through an eye-glass, while an older connoisseur points out the various attributes of her form. Rowlandson mines a rich and explicit voyeuristic vein in Cunny seurs. The woman with red hair lies naked, holding her bottom in the air and gazing contentedly out of the frame, while three men, fully dressed in wigs and frock coats, gaze down between her legs. One is nearly biting her bottom as he grasps himself. There are many like this.

One of my favourites of his explicit, voyeuristic prints is of the couple in a cottage doorway, the woman is still wearing her linen cap and her head is back as she cries out. A plump man is smoking a pipe reflectively in the upstairs window and a young woman is watching, hanging onto the tree. Her pink skirts are up around her waist exposing her round bottom and her right hand is between her legs. A chicken pecks at the ground by her slippered feet. 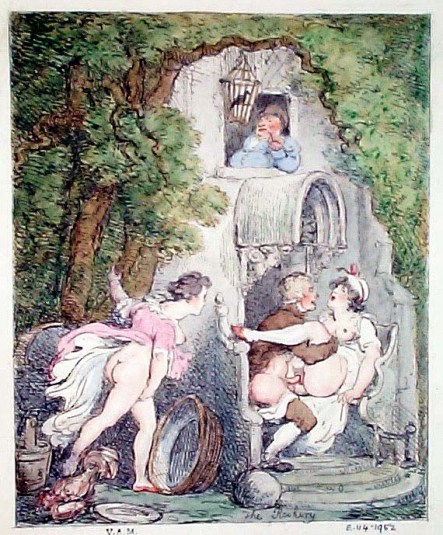