The Season of Grottos 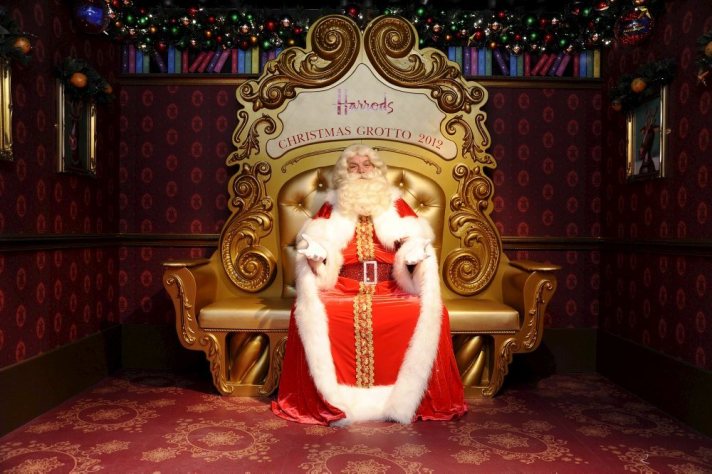 From late November, it’s impossible to go anywhere in London without coming across a grotto. They’re in shopping malls, primary school fairs, department stores, museums and even my local garden centre. Some are for the whole family, some are made of wrapping paper and cardboard, the one at the Museum of London is Victorian-themed, but all of them house a man in red with a long, white beard sitting on a Christmas throne. Children queue to enter, have a chat with the old man about the presents they’d like to receive and then file out with a small gift. All very festive.

In 1720, the successful poet and wit, Alexander Pope, also began to build his own grotto. He was inspired by Calypso’s vaulted caves and his travels on the continent. He’d made enough money from his translations of the Iliad and the Odyssey to erect a grand villa on the Thames in the village of Twickenham where he installed himself, his aged mother and his old nurse. The substantial house rose like a great Palladian church along the river, surrounded by a malthouse, a tannery and a wheel-makers. His artificial cave was made in the cellar and also doubled up as a tunnel that ran below the road and linked the house to his five acres of landscaped garden beyond. A rather clever idea that was copied both by his neighbours and other luminaries like David Garrick in his house in Hampton. By 1725, Pope wrote to Edward Blount that he had “put the last hand to my works of this kind, in happily finishing the subterraneous Way and Grotto.” The walls were clad with shells, flints and mirrored chips and the ground was paved with “smooth stones”. Inside there were “niches and seats” built into the walls and a table where he might write poetry. In 1739, fired up by his new found obsession for mineralogy, he replaced all the shells with donated ores, spars, stalactites, crystals, Bristol and Cornish diamonds, marble, alabaster, snakestones and freestone. 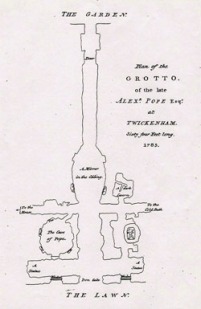 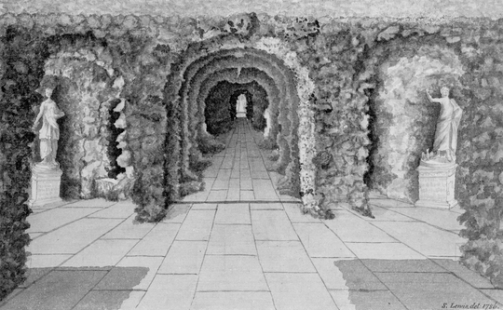 Last week, on an extremely cold winter evening, I found myself in Twickenham descending into Pope’s cave. His grand villa was demolished in 1807 and his garden over the road has long been sold off piecemeal. The grotto now sits beneath a school and can only be accessed by appointment. The Pope’s Grotto Preservation Trust has been working tirelessly, with the help of other historical organisations, to restore the grotto as far as possible into something resembling its former glory. Over the years, many of the stones and crystals that lined the caves were pilfered by visitors as souvenirs or talismanic objects. The rock pool in the corner has been filled in. The plinth above the entrance, in which was carved the curious words: SECRETUM ITER ET FALLENTIS SEMITA VITAE – A secret journey also leads down the path of a fearful life – has gone. At some point a statue of St James and the Virgin Mary replaced the Roman statues with their arms raised and their togas sweeping down to the ground. The “Spring of the clearest water, which falls in a perpetual Rill, that echoes thru’ the Cavern day and night,” seems to have disappeared – there are plans to recover it. But some of the mirrors that he fixed to reflect natural light from the river into the cavern are still there, faded and crooked.

The amount of time and passion Pope spent upon his grotto imbued it with almost mythic power at the time; he conceived it as a “Musaeum” or “Nymphaeum”. One can imagine his excitement at finding a Homeric spring in it where the muses might make their home; where nymphs might commune with him and fill his spirit. And even now, this cold, echoing sequence of chambers resembles a Temple from another age; a cave where the ancients slip from the shadows. There is a cartoon of Alexander Pope from the 1730s drawn by William Kent, where he is sitting in his cavern at a table, his chin on his hand. He’s looking down at his work, frowning in thought, and his slender leg sticks out into the room. His large, curled wig fills the archway above him. Was this how Pope imagined writing in his grotto or how he really used it? I presume that he did sit there and await inspiration as he once wrote: “My Luxr’y – lolling in my peaceful Grot.” I can’t imagine that the cold and damp invigorated his already frail and sick body. He died at 56 years old in 1744. 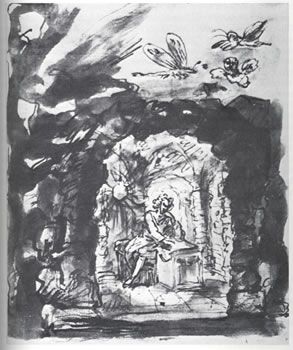 Over the last two hundred years, our idea of a grotto has shifted from an artificial cave in a garden where muses lurk to a sparkling room for Father Christmas to bestow our children with cheer and a hunger for more gifts. Is this red-clad, white-bearded man our 21st century oracle? The muse of conspicuous consumption in whom we confide our desires for that year, the gift that will make life better, and then await its wrapped arrival beneath a tree on 25th December? 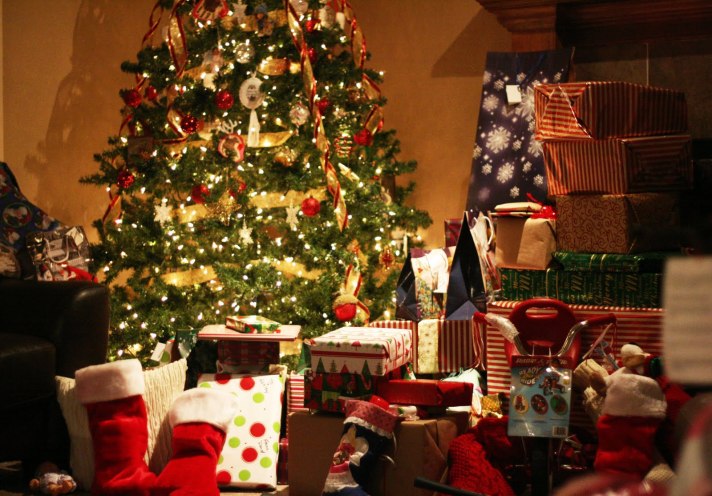 The pamphlet, Alexander Pope’s Grotto in Twickenham, by Anthony Beckles Willson (The Twickenham Museum, 2014) is extremely informative. And for anyone interested in the grotto, do visit Pope’s Grotto Preservation Trust – http://www.popesgrotto.org.uk.