William Hamilton as a Roman Vase

There’s a Gillray caricature of Sir William Hamilton as an ancient Roman vase, published in May 1801 and entitled “From Sir Wllm Hamilton’s Collection”. We see only the back of his green coat tapering down. His shoulders are enormously broad with gold epaulettes at each tip and his body then bulges round in the classical shape of the Hamilton Vase – probably the most famous Volute Krater from his collection. There is some academic debate over whether it’s actually supposed to be the Ambassador of Naples, recently returned to England, or Horatio Nelson – his wife’s lover. However, it doesn’t really matter because it tells us how far Hamilton was associated in the popular imagination with Classical Greek and Roman antiquities by the start of the 19th century. He was, as Josiah Wedgwood wrote, the undoubted “legislator of taste”.

In 1772, Hamilton had sold an extensive collection of Greek vases, bronzes, sealstones, coins and numerous other antiquities to the British Museum. As Ambassador to Naples and Sicily for 36 years, he was in the perfect position to further his scholarly interest in Classical civilisations and to gather as many of the high quality antiquities that emerged from excavations of Roman villas in Pompeii and Herculaneum, and burial sites in Southern Italy and Sicily. By selling his collection, and encouraging others to do likewise, he was instrumental in shifting the emergent museum’s scope beyond the initial assemblage of curiosities – books, manuscripts, specimens of natural history and other eclectic pieces – towards Classical archaeology. Opening the classics up beyond the Greek and Latin texts that were part of an Englishman’s education and influencing the Neo Classical movement that was so pervasive in art, architecture and design in the second half of the 18th century. 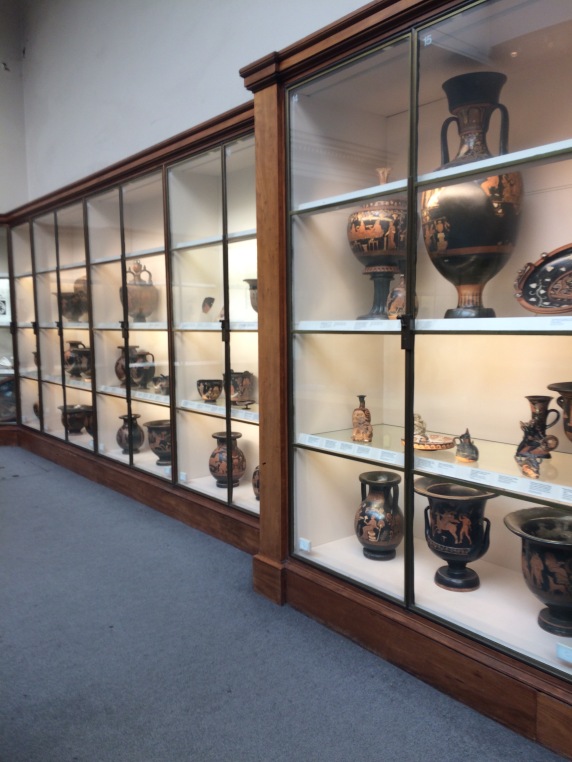 Last week, I went to the British Museum to browse through the Greek and Roman Antiquities in the upstairs galleries. I navigated my way through the Ancient Egyptian rooms – packed with school children studying 5000 year old corpses and cat mummies – and arrived in the long, light and airy rooms that house part of the collection. There were a satisfying amount of people peering into the glass cabinets that line the walls and stand freely in the centre and an overwhelming amount to look at. It holds cabinet after cabinet of terracotta wine jugs, beautifully painted with mythic stories, and oil burning bowls; inscribed plates of bronze and clay; votive bronze statuettes of gods and goddesses; the heads of noseless, bearded men made of stone; clay cups and funeral urns; a bowl for mixing wine and water – with the story of Orestes at Delphi winding around the outside; a baby feeder and a large winged statue; a ladle for cooking and some beautiful gold earrings; amongst hundreds of other objects from ancient times.

I encouraged my eight year old daughter to do a cursory survey of the Hamilton Collection on display and she counted fifteen objects. (It’s not modern slavery – I bought her a cake as payment.) However, this number doesn’t really do justice to William Hamilton’s wide ranging contribution to 18th century culture. He had a vast collection but it couldn’t compare to the almost industrial excavations on the 19th century that brought a flood of archaeological objects into the Museum. During his lifetime, he sold many of his antiquities to private owners to raise money. The BM often purchased them latterly. For example, the Barberini or Portland vase, one of the finest examples of ancient cameo glass in the world, was brought over to London by Hamilton in 1783 and bought by the Duchess of Portland, whose family lent it to the museum in 1810. But he set the course of the collection from the 1770s onwards. 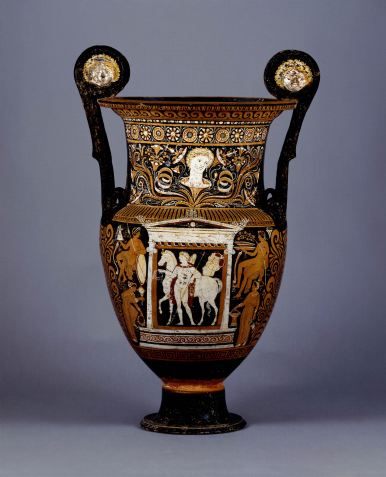 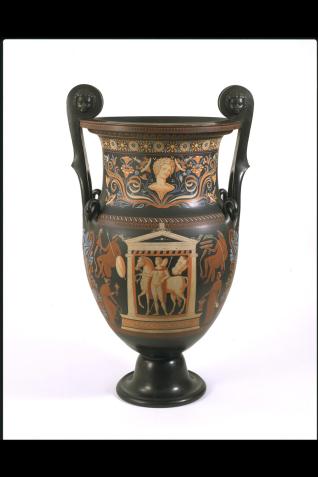 In 1767, an illustrated catalogue of Hamilton’s collection of vases was published by Baron d’Hancarville. It inspired manufacturers like Josiah Wedgwood, who had an uncanny ability to ride the crest of fashion, to recreate neo-classical objects – encaustic recreations, chinaware for the home and other neo classical objects. The wealthy could express their good taste by designing their houses in the classical style and filling them with sculpture and plates in the “antique manner”. The Hamilton vase, a volute krater – standing proud in the British Museum at 88.5cm high – is a dominating and intricate ceremonial jug made in the 4th century BC. D’Hancarville thought it so important that he dedicated three black and white and two double page colour engravings to it in his catalogue and Josiah Wedgwood made replicas of it in black basalt for a small fortune – you could buy it to display in your home. An example of which is in the V&A. I love this trickling down of “taste”.

I find it fascinating that I’m trying to understand culture in the second half of the 18th century by standing in a room of objects from ancient Rome. It really is unexpected. It also spills into the gnarly and uncomfortable contemporary issue of ownership and of where these objects ought to be exhibited. William Hamilton lost half of his great collection at sea when the ship Colossus sank in 1801. The wreck and its contents have never been recovered. It broke his heart, but should he have left them in their country of origin rather than risking the journey across the sea? The Parthenon sculptures, bought by Lord Elgin while he was British Ambassador to the Ottoman Empire and sold to the British Museum in 1816, continue to be at the heart of this debate. And yet, Elgin was merely following in the influential footsteps of men like Sir William Hamilton.

On a different note, I’m struggling to publish my blog weekly at the moment due to a self-imposed deadline with the editing of my book – The Posture Girl. I’m hoping to become more regular again by Christmas. Many thanks for continuing to read my pieces, Lucy.