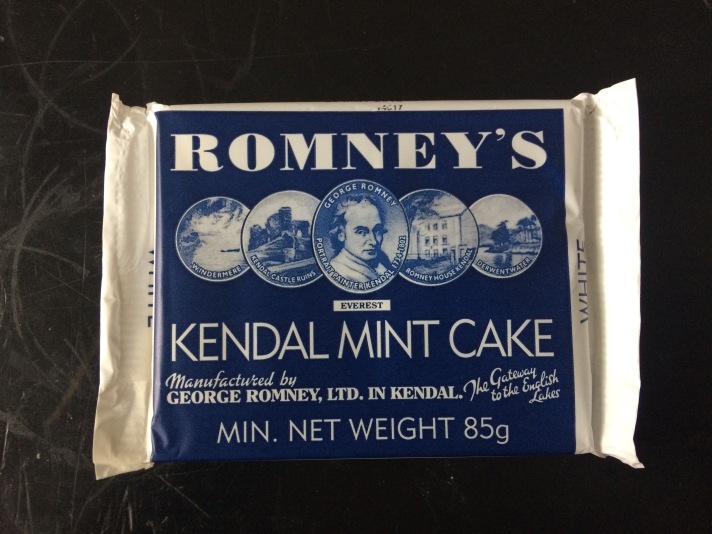 I went into a hiking and outdoors shop a couple of weeks ago to buy a head torch for my daughter. And as I was paying, a rectangular, flat packet in blue and white plastic next to the till caught my eye. “Romney’s Kendal Mint Cake” was emblazoned in white on dark blue across the front. For anyone who is partial to a mint cake, this particular brand is probably well known and possibly even superior to all others. But to me, who’s been considering George Romney as a fashionable 18th century portraitist, whose star has waned over the last two hundred years, it was a shock. Even a revelation.

I bought one to take home. It sits in your hand and has a comforting weight. There are five small circular pictures in a strap across the middle of the packaging and in the centre is a portrait of the artist in blue and white: “George Romney – portrait painter Kendal 1734-1802”. The face looks like it’s based on the self-portrait that he painted for his friend the poet, William Hayley, in 1784. The pictures to the left are quite blurred sketches of Windermere and Kendal Castle ruins and on the right are Romney House Kendal and Derwent Water. The packet tells us that it was manufactured by “George Romney, Ltd. In Kendal. The Gateway to the English Lakes” and that the minimum net weight is 85g. Curiously, there is also the word “EVEREST” beneath his face. On the back of the packet it explains that it was the first mint cake to be successfully carried to the top of Mount Everest on 29th May 1953, packed in high altitude packs. Sir Edmund Hillary and Sirdir Tenzing ate the mint cake on the summit, as they “gazed at the countryside far below them.”

I cannot help wondering what George Romney would think about his name and face being used on a “Kendal Mint Cake (that) has become a firm favourite with hikers, climbers and visitors to the Lake District”? How could he have imagined that his artistic legacy would be used in this way? It’s not that George Romney has been forgotten by the 21st century. There have been six retrospective exhibitions since 1900. The largest was his bicentenary in 2002, curated and catalogued by his champion, the art historian, Alex Kidson. His paintings still hang across London at the National Portrait Gallery, Dulwich Picture Gallery and the Royal Maritime Museum, to name a few. There is quite a collection in the Huntington Galleries in California and also at the Museums and Galleries on Merseyside. But I think it’s fair to say that his reputation, which sank almost entirely in the Edwardian era, no longer equals those of his contemporaries like Gainsborough or Reynolds. He’s not always mentioned in books on the artistic output of the time. The gallery in Hampstead which was to exhibit his work, planned by his son, John Romney, in the 1790s, never materialised. And, perhaps due to the deep depression he’d sunk into in his last years, at his death he left a confusion of paintings, many undated and some unfinished.

What interests me about artistic legacy, is that it isn’t always clear whose work will rise over time and whose will sink, or how. It can’t always be guessed at, especially as fashions change – look at the controversy over the Cecil Rhodes statue in Oxford. Much depends on who is in control of the artist’s reputation and how they choose to display or sell it. The work of Romney and Reynolds were often compared – they were in direct competition for London’s most fashionable clients in the 1770s and 1780s – and their portraits have some similarities. They were both fascinated by Classicism and theatrical realism in Art, both wanted to be remembered as great painters of History but both are better known for their prolific output of society portraits. However, they diverged over the Academy. Romney staunchly rejected it. He was an outsider. Reynolds established it and wrote a great deal on Art, thereby placing himself within the canon and being formally recognised for his contributions. Do artists need to consider and direct their reputations before they die?

I find the connection of this Kendal delicacy and Romney particularly fascinating when thinking of how and where you’re remembered after death. He left the Lake District for London in 1762 when he was 28 years old. He sold everything, leaving a young family, to make his fortune in the capital, like many ambitious men before and after him. He didn’t return to the Lakes until 1798, when he was dying, and so depressed and mad that it was deemed appropriate for his estranged wife to tend to him. He’d rejected the option of becoming a successful provincial artist. He’d wanted more. He was gripped by the great historic themes and grand emotions in myth rather than the dramatic landscape of his birth and the local gentry. He didn’t celebrate and immortalise the area of his birth like Wordsworth. There is no evidence that he ever wanted to return.

And yet, some people will only know his face by reaching into their waterproof, zipped pocket and pulling out a sustaining bar of mint cake while up a mountain in the Lakes and gazing at the countryside spread out far below them.