London in the 18th century was a city of spectacle and display. Any interest or inclination, albeit scientific, prurient or thrill seeking, could be satisfied for money. There were the great theatres of Covent Garden and Drury Lane; dancing bears on street corners; James Graham’s Temple of Health for breath-taking displays of electrical power; the Pleasure Gardens competed for the most magnificent fireworks and concerts; brothels put on exotic displays of Venus from Tahiti; lions, tigers and elephants could be seen caged in the Exeter Exchange; the British Museum was founded in 1753 as the first national public museum in the world, housing all manner of natural and artificial curiosities; and at the larger Coaching Inns and annual fairs, and even on street corners, you could gawp at an “unnatural” human. A “monster”.

This was the century before the great commercialisation of the side show when men like Barnum made — and lost — a fortune from the unusual and exotic. When the so-called freaks were gathered together, shown collectively and introduced by showmen with great fanfare. When people flocked to see them. So valuable and coveted were the stock of unusual humanity by the middle of the 19th century that, in 1844, Barnum was invited to give a private viewing of General Tom Thumb to Queen Victoria and Prince Albert. The English Queen liked the diminutive child so much that she gave him three audiences in total. This was well before the 20th century when such displays were no longer patronised by royalty and were generally seen as abhorrent and demeaning, unless, of course, they were given a medical narrative and were shown on TV.

In the 1700s and early 1800s, the display of people who were extremely tall, fat, thin or small in size, hairy of body or showed other marvels of nature was a tawdry affair; make-shift and undocumented. It seems that most had a manager who split the profits of the ticket price. A few ran their own businesses, like the Irish giant, Charles Byrne, whose remains were stolen and displayed at the Royal College of Surgeons, but this seems to be more unusual. These “monsters” were displayed amongst the hubbub of the courtyard of a Coaching Inn or in a side room behind a rough curtain. There is a picture by Rowlandson of the St Bartholomew fair where there is a tent for exotic animals next to a tent for unusual humans. They were sold to the public as a thrilling distraction; to make the weary travellers and workers gasp with disgust and fear; to recoil in horror and excitement; to gather together in their commonality. The “monsters” didn’t have necessarily to perform but could be touched, poked and felt. They were casually dehumanised, mere curiosities. It’s unthinkable and grotesque from our perspective and all the more fascinating for it. 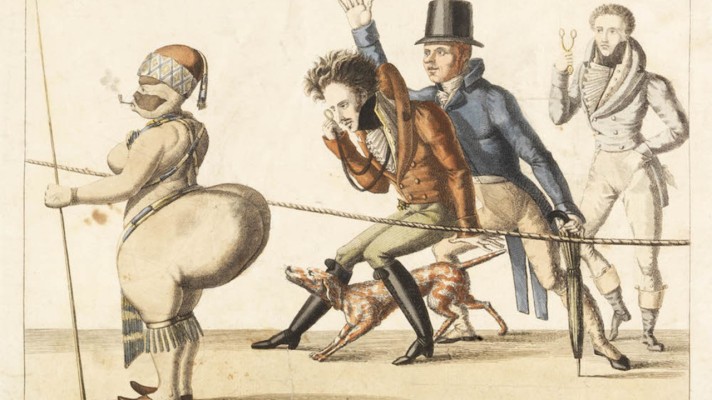 And it wasn’t only human curiosities found in Britain who were exhibited. At the same time as Darwin was exploring the world and collecting specimens, other scientists and businessmen were collecting humans to display in the parlours and theatres of London; examples of exotic bounty and research. All part of the 18th century obsession with collectables, scientific exploration and the extraordinary. The display of tribal peoples continued throughout the 19th century in the great Exhibitions of Empire. Saartje Baartman, named the Hottentot Venus, was an early example of this demeaning practice. She was brought over from South Africa by a doctor to be paraded throughout St James’s and the salons of Paris. She became the focus of a court case lodged by the abolitionists in 1810 but as she was unwilling to speak out against her manager and there were no signs of maltreatment, it was ruled that she could continue to be displayed. She died at only 26 years old and her remains, her brain, sexual organs and skeleton, were exhibited in France until the 1970s.

One can only hope that these “monsters” or “freaks” were able to gain some financial stability from their stoic display. That they were able to gaze out over their prying audience as though looking out to sea, trying to spot something in the distance. As though they were bored rather than exploited. 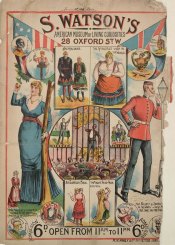 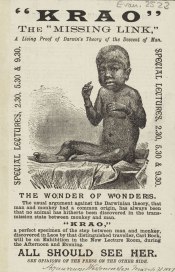 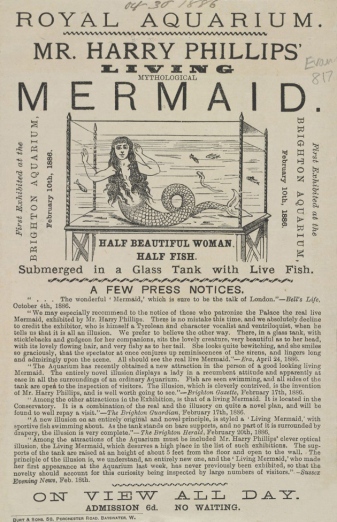