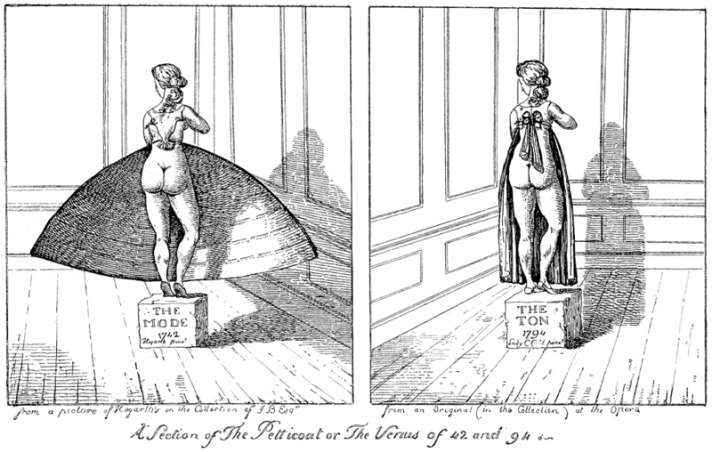 Nowadays, not wearing underpants is a statement. It’s an act of seduction or daring or extreme forgetfulness. Going commando is whispered and giggled about. It’s funny and possibly sexy and definitely out of the ordinary. However, in the 18th century, respectable women didn’t wear pants, only whores did.

When I first started looking into clothing, for my novel, I presumed that women would be wearing modest pantaloons that hung loosely down the thighs. The sort that one sees in etchings of harlots washing their faces or wealthy women holding onto bed frames as they are tied into corsets. However, pantaloons only began to form a part of feminine clothing at the very end of the 18th century in response to the Regency fashion for floaty, transparent muslin dresses that were worn without petticoats. Before that women’s undergarments consisted of a white linen slip beneath stays to keep the breasts squashed up and the torso rigid above stockings that tied just above the knee. Was this just another example of the licentiousness of the period? Easy access for intercourse? And if so, why did prostitutes wear undergarments? Or has our perception of underwear simply become sexualised over the last two centuries? So that we now collectively believe in the fundamental allure of revealing lace bras and slinky satin pants? The final unwrapping before nakedness, like a ribbon on a present? Was it practicality that encouraged women to wear nothing beneath the layers of petticoats and hoops?

Part of the problem in delving into this subject is that it wasn’t really written about in letters or journals, nor were undergarments special or valuable enough to be carefully kept in a locked trunk for the next generation. They were private and regularly changed. Anne Buck, the brilliant clothes historian, doesn’t mention undergarments in her seminal book, Dress in 18th century England. As Lucy Worsley wrote in a Guardian review of the V&A exhibition, Undressed: A Brief History of Underwear, that ended earlier this year: “Worn beneath our clothes, underwear has literally been hidden from history. People often either take it for granted, or don’t like to talk about it.” Female underwear before the 20th century was designed to enhance the ideal feminine shape beneath clothing — for example, the conical torso, large hips and raised breasts of the 1770s and 80s — and is therefore quite different to our contemporary idea of underwear being potentially on display.

Although it’s more enticing to presume otherwise, I don’t think that there was anything immodest or lascivious about women going commando in the 18th century. Pants simply weren’t needed. When you’re bulked out with panniers and hip pads, tied into petticoats — possibly stuffed with wool or even feathers in the colder months — before layering on skirts and an apron on top, there is no hope of your skirts lifting in a gust of wind like Marilyn Monroe’s. Indeed, showing stockinged legs up to the knee was something that only happened on stage by daring actresses dressed in breeches for male parts. Decent women wouldn’t dream of raising their skirts and flashing some thigh. And for practical reasons, pants would have been more of a hindrance than a help when struggling through the floor length layers of material to urinate.

In a period of rudimentary plumbing, everyone used chamber pots at night and many would use a Bourdaloue in the day when out or caught off guard or even at home. In the painting, La Toilette Intime, by Francois Boucher, the lady in ruffled green sleeves is relieving herself into the gravy-boat shaped vessel in what looks like a parlour or formal room. It could happen anywhere. Church attendance may have been low in 18th century England but everyone loved the theatre and the performances could stretch on for hours. What could be better than to step to the back of the box and slip the china vessel between your legs under the cotton petticoats and silk to relieve yourself? Careful not to spill any on the valuable fabric. All of which, if I’m honest, seems pretty impressive balancing act that might have been completely impossible if struggling to hold up the layered petticoats and hoops with one arm and pull down pants as well. So, perhaps, being bare bottomed was actually a way of retaining a level of decorum in public.

There are still many questions remaining. Why would women of easy virtue wear a form of pantaloons? Seepage? And on that subject, what did women do about bleeding every month? I’d love to read a detailed history of underwear before the 19th century. Is there one?