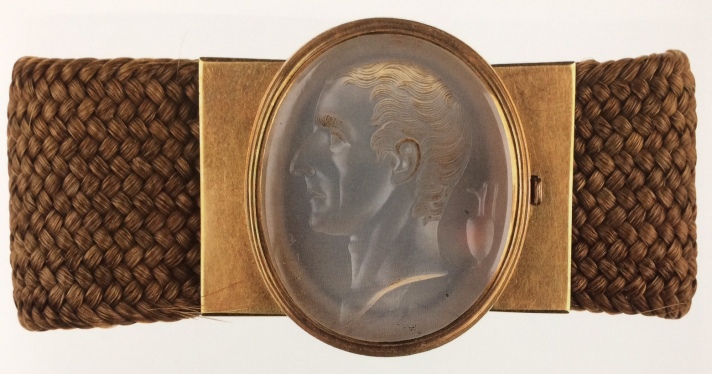 It took me by surprise, her bracelet of woven hair. I was meandering through the brilliant — and, sadly, finished — exhibition, Emma Hamilton, Seduction and Celebrity, at the National Maritime Museum in Greenwich. Slowly moving between the many cabinets of silver trinkets and china souvenirs from Germany and the love letters. The oil paintings on the walls of her posing as ancient goddesses and the vases dug up from the Neapolitan landscape, where she lived for many years. And amongst it all was a bracelet near the top of a display cabinet. I nearly passed over it at first; drab and nondescript against the dark material.

The centrepiece was an intaglio of Sir William Hamilton engraved on a clear, smoky stone, oval in shape and flat. Perhaps the size of a shilling. His hair swept towards his face rather like a Roman Emperor and his Adam’s apple is prominent with implied virility. He had a strong, beaky nose and a worn face. It’s the generic face of a battle-hardened warrior or a long serving senator. He was a diplomat for the British government and a collector of great repute. Floating beside him is a Roman vase and the hint of Mount Vesuvius erupts beneath his head. But if I’m honest, the image of her husband feels polite and necessary, not really the point of the bracelet. Sir William’s small engraved portrait is mounted in gold upon a flat gold clasp and the band that held it together was made of her hair. Her real hair. Platted in tiny, even plats. Seven of them woven together to make a strong and even strap about six centimetres wide. Not a single hair is out of place, they are so expertly bound. They don’t look as if they came from the head of a woman who died in 1815, over two hundred years ago.

So many things struck me about the bracelet. Firstly, her hair was fairer and more varied in tone than I expected. Could I really write about her if her hair was so different from my imagined Emma? Did I know her at all? What else have I taken for granted? In the many paintings of her made throughout her life her hair is one of her most arresting features. It’s all darkness against her pale white skin and blue eyes. It’s extraordinarily long and wavy, growing all the way down past her hips like Botticelli’s Venus. There are some Romney portraits where her hair has a red tinge to it and curls like fire around her face, like Miranda and Circe, but she is mostly dark, as was fashionable at the time. Yet this hair, her hair, had strands of copper and even blond in it. Was it the Neapolitan sun that turned it golden? Surely a woman of her aspirations wouldn’t dare go into the sun for fear that it would ruin her pale complexion and place her amongst the rough peasants that tilled the baked fields?

Was it silky or coarse? Would it be cold under my fingertips or warm? All the many men who coveted her or loved her would have touched or longed to touch it. I wanted to too. She died in Calais in an unmarked pauper’s grave in her mid-forties. There are so few mementos or relics of her. And yet here was an abundance woven together.

Why did she do it? Why had Emma given her husband such a gift? The trade and creation of portraits was common amongst wealthy Europeans. Indeed it was a rite of passage to have your image painted in oils or engraved in stone or scratched and coloured onto bone to hang around your beloved’s neck. But hair? It’s the physicality of the offering that is arresting and touching and almost grotesque. Like Samson, did she relinquish the strength in her hair? Hair is imbued with symbolism and she was a woman who understood symbols. Indeed she traded in them. And the bracelet is so personal, a far grander statement than a surreptitious lock to keep in a locket. And it would have needed a fair amount of hair to make such a tightly woven band, each strand over six inches long at a guess. Did she spend a few months with her hair up to hide the missing chunk? Or was it made on a whim after a cut?

And then I thought that perhaps for her it had a magical quality. Perhaps when she committed to him, she embedded his image within the strands of herself as a gift of loyalty and intention, a gift that he would appreciate. And there is something overblown and passionate about it, even childish, that I think about it even now, months later.

The brilliant exhibition – Emma Hamilton, Seduction and Celebrity – at the National Maritime Museum finished on April 2017.